How to get here

It's always best to plan your trip and travel with appropriate maps.

Castle Hill and Baulkham Hills are 35 minutes from the city via Hills M2 Motorway. Follow the Metroad 2 signs.

From the south and west use the Westlink M7 which connects directly with the M4 and M5 motorways. The Westlink M7 has interchanges with Richmond Road and Norwest Boulevard. For more information call 13 TOLL (13 8655)

Access to Dural and Wisemans Ferry is best via Hills M2 Motorway to the Castle Hill exit. Follow the Metroad 2 signs to Castle Hill Road then follow Tourist Drive 15 along Old Northern Road through Dural all the way to Wisemans Ferry (approx 90 minutes from the city).

To Windsor/Richmond 75 minutes from the city via Hills M2 Motorway to the end then northwest along Old Windsor Road and Windsor Road right through to Windsor . Follow the Metroad 2 signs.

Trains operate on both the Northern Line to Pennant Hills Station and Western Line to Parramatta Station where connecting bus services will bring you to the Hills District.

For train timetable information phone the Transport Infoline on 131 500.

Express buses operate to and from the City via the M2 Hills Motorway.

Bus companies operating local services within the region are: 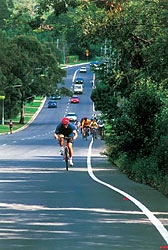 To really make an impression, fly direct from Sydney Harbour at Rose Bay in a seaplane landing on The Hawkesbury River at beautiful Berowra Waters. You can then spoil yourself with a feast at The Restaurant on Berowra Waters.