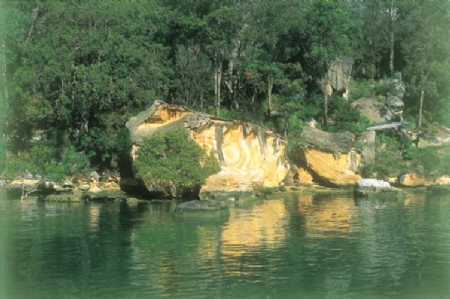 Berowra Waters is located approximately 30 kilometres north of Sydney in the Shire of Hornsby.

Berowra Waters was originally known by European settlers as Berowra Creek. The area was first used by settlers for felling timber, which pushed settlement into the upper reaches of the creek. In 1902 a punt was built to transport goods across the creek from the Dural ‘food-bowl’, ready for transport via railway to Sydney. During the Second World War the Berowra Waters Road was rigged with explosives so as it could be destroyed in the event of invasion.

The atmosphere of Berowra Waters hasn’t changed dramatically since it original settlement, and now represents a tranquil escape from the city. The marina is a base for a plethora of pleasure craft and several cruise boats depart from here. Many restaurants overlook the water in the shadows of the giant bush covered mountains. A seaplane service from Sydney City also lands here.

The original inhabitants of the Berowra Waters area were the Darug people. The Darug were the custodians of the majority of what is now the Greater Sydney region. They were divided into a number of different ‘clans’, whose quick demise upon European settlement has sadly resulted in very little information remaining on how they utilised the local area.