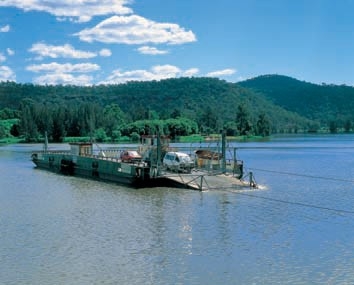 Wisemans Ferry is located approximately 80 kilometres northwest of the Sydney CBD, on the Hawkesbury River, in the Shire of Baulkham Hills.

The Wisemans Ferry village was named after Solomon Wiseman, a convict sent to the colony in 1806. In 1827 he received permission to operate a ferry at the river crossing which now bears his name. The ferry helped to serve the farmers of the area and support the convicts building the Great North Road. For many years the township was the major farming area for the new settlement, but the many floods took their toll and the population dwindled around the 1850's.

Today, Wisemans Ferry hasn’t change much from its historical roots. The old ferries still take cars across the river. The ferry masters house is a pub full of ambience. There is a 9-hole golf course, conference centre, many B&Bs and a great park for picnics by the river. Don’t miss the opportunity to walk the convict built Great North Road at Devines Hill and see the amazing engineering feat.

The original inhabitants of the Wisemans Ferry area were the Darug people. The Darug were the custodians of the majority of what is now the Greater Sydney region. They were divided into a number of different ‘clans’, whose quick demise upon European settlement has sadly resulted in very little information remaining on how the local area was utilised.