Know Your Flood Risk in the Hawkesbury-Nepean Valley NSW SES Commissioner Carlene York said that wetter conditions and the recent February flood event highlight the importance of being prepared for floods in the valley.

“This public safety campaign is a timely reminder of the significant flood risk in this valley,” Commissioner York said.

"The February 2020 flood event was relatively small compared to others the region has experienced in the past. Everyone is responsible for knowing their risks and being prepared for floods."

The ‘Floods. The Risk is Real.’ campaign aims to increase flood awareness in the Hawkesbury-Nepean Valley and to encourage people to take at least one action to prepare for floods.

The first phase of the campaign was delivered in late 2019, and it resulted in more than 52,000 unique visits to the NSW SES website to access flood information. The post-campaign survey
showed that more than 70% of people who saw the campaign took at least one action to prepare for floods.

The second phase of this public safety campaign includes a direct mail out to suburbs that are impacted by a 1 in 500 chance per year flood. The direct mail information is localised for five areas across the valley and includes a local flood map and historical flood information.

The campaign also features local print and digital advertising, supported by an interactive flood mapping tool and a suite of resources about local risks across the floodplain.

Acting Zone Commander Metropolitan, Stuart Fisher said that the augmented reality techniques used in the new video, ‘The Risk is Real’, have created incredibly life-like scenarios which will be easy for people to relate to.

“In this video, NSW SES volunteers step through the real risks people can face from flooding in their streets and their homes in an immersive mixed reality environment,” Commander Fisher said.

“These leading-edge visualisation techniques have been used effectively overseas to help demonstrate the dangers of floodwaters. They are an engaging way of sharing the story about flood risk in the Hawkesbury-Nepean valley.”

Residents and workers in the Hawkesbury-Nepean Valley are encouraged to check their flood risk now.

The Hawkesbury-Nepean Valley covers around 500 square kilometres in Western Sydney, from Bents Basin near Wallacia to the Brooklyn Bridge. The four main local government areas within the valley are Penrith City, Hawkesbury City, The Hills Shire and Blacktown City.

This campaign is being delivered by the NSW SES and Infrastructure NSW, in partnership with Resilience NSW. 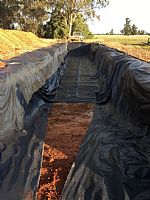 Be Harvest Prepared: The Time is Right to Think About On-Farm Grain Storage Options
With many grain producers across NSW looking at an early and possibly...

Rally for Buses on the Brink
Dozens of family-owned and independent buses are on the brink of collapse,...

How Organic Farming Practices lead to a Circular Economy
Due to the increasing effects and consequences of climate change, we experienced...
More News »