Local Stars in Dark Irish Comedy for Castle Hill June Season: The Cripple of Inishmaan at the Pavilion Theatre 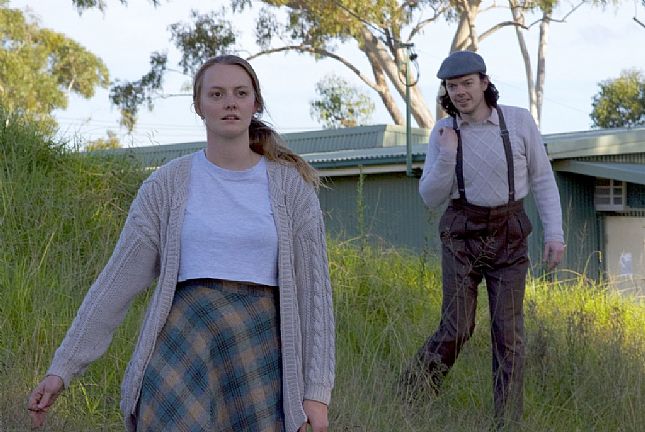 Aimee and Robert
An astonishing piece of theatre comes to Sydney’s Pavilion Theatre in June when Castle Hill Players present The Cripple of Inishmaan.

From the award-winning, critically acclaimed British writer, Martin McDonagh (The Beauty Queen of Leenane, Three Billboards Outside Ebbing, Missouri) comes a dark comedy, set on a small island off the west coast of Ireland.

It’s 1934 in the small Aran Islands community of Inishmaan when Billy, a crippled teenager, schemes to attain a role in a film.

Tongues are set a-wagging when word spreads around Inishmaan that a Hollywood director is coming to the neighbouring island of Inishmore. Billy is determined to be cast, if only to break away from the tedium of his daily existence.

Director Dave Went of Mt Colah, has assembled an outstanding cast of actors to portray such eclectic characters as Johnnypateenmike (Dimitri Armatas of Lane Cove), a loudmouth bore who insists on knowing everyone’s business.

He lives with his ancient mother (Bayview's Annette Emerton), a craggy widow drinking herself to death - and who won’t go quietly!  Kate (King's Langley's Jan Mahoney) and Eileen (West Ryde's Anna Desjardins) run the local store and have raised Billy since his parents died by drowning.

Their love for Billy is real, although they also see Billy as a hopeless case… and something of a burden.  Bartley (Glenorie's Toby Rowe) is very much dominated by his sister Helen (Aimee Honor-Eltham from The Entrance North) who considers herself the prettiest girl in Ireland - and her outrageous comments can peel paint off the walls!

The Doctor (Glenorie's Steven Rowe) does his best to tend to the locals with care while Babbybobby (Kellyville's Jason Spindlow) is a quiet man who tends to his boat - and backs Billy’s scheme. Then there is Cripple Billy (Baulkham Hills' Robert Snars), a sensitive young man, held back in life by physical disability and the restraints of parochial island life.

After the sell-out successes of Things I Know to be True and Always a Bridesmaid, Castle Hill Players production of The Cripple of Inishmaan is the latest celebration of 2021’s return to live theatre - at full throttle! And - in the comfortable, convenient and welcoming Pavilion Theatre - this latest play again promises a night of high quality entertainment!

The Cripple of Inishmaan

Compost is Vital to Good Soil Health and Climate Resilience
The effects of climate change have become more apparent in recent years,...