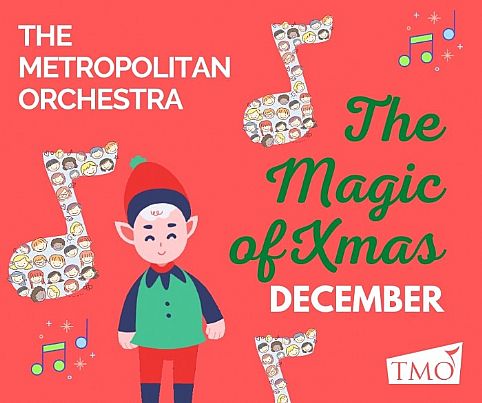 Click to enlarge
When:
Every day until Sun 05 Dec 2021
Cost:
$15
Booking:
A Must
Facilities:
Public Transport, Toilet on Site
Details:
Meet Elf Nat from the North Pole who has just been promoted to Number One Head Elf. Enter into Elf Nat’s workshop with Conductor Sarah-Grace and The Metropolitan Orchestra (TMO) as he reads letters from special girls and boys to make their Christmas wishes come true.

This fabulously fun Christmas concert written by TMO’s Artistic Director Sarah-Grace Williams and acclaimed Children’s Actor Nat Jobe, will introduce children to the magical music of Tchaikovsky’s delightful Nutcracker Suite in an engaging and intimate musical setting. Children will get to sing and dance to Elf Nat’s favourite Christmas Carols which will leave everyone glowing with the special magic that this wonderful time of year brings.

Joining Conductor Sarah-Grace and The Metropolitan Orchestra is one of Australia’s foremost Children’s entertainers from the stage and Screen. Nat Jobe has played a myriad of roles including the donkey from Shrek, a hyena in Disney’s The Lion King, he played both Dog and Frog in the family show Room on the Broom and also performed in the classic Around the World in 80 Days.

This is your chance to give your children an engaging and interactive first-class musical experience with a unique opportunity to get up close to the instruments of a symphony orchestra. Little ones will be immersed in all the magic of Christmas while falling in love with beautiful and timeless music played by the orchestra.

Share Children’s Christmas Concert With The Metropolitan Orchestra with friends.